This design project, and its accompanying research on European riverfronts, explores the potential of today’s neglected riverfronts and provides a new vision for the urban river in order to restore its relationship with land, city and inhabitants. This project expands beyond conceptual frameworks and radically rethinks what it is to produce an architectural project in the process of challenging the very discipline itself. By ‘re-weaving’ Urbanism, Mobility, Architecture and Landscape (UMAL) in the urban fabric of Vienna, the riverfront is transformed in an actively and productively used public space in order to (re-)connect the city and its river.
River cities displayed an intimate and complex relationship with water. However, during the industrialization the waterway network lost its monopoly in infrastructure and river-cities have seen a weakening of their relationship with water. The riverfront today is a legacy of industrialization and maritime commerce and typically a city’s most contested zone. The river lost is primary function in the city and has become a physical border. It requires a radical restructuring of its meaning, use and its occupants; it needs its own ‘physical’ regeneration.
This graduation project is based on an extensive research of European riverfronts with the goal to develop a new vision for the urban river that allows for the re-connection of the city and its river. The core idea of this new vision is based on the primary fact that a river is not a static entity, but must be understood as a dynamic process. We should change our ‘defence’ attitude of today, fuelled by the threat of raising water levels, to an attitude of acceptance. Acceptance means designing a riverfront that is capable to adjust its usage and appearance to the dynamics of the river. Instead of seeing the river as a threat we should see it as an opportunity. In this way we can generate new visual and physical relationships to increase our interaction and awareness of the relationship between the city and the river. 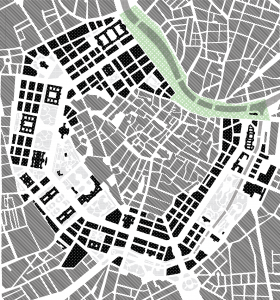 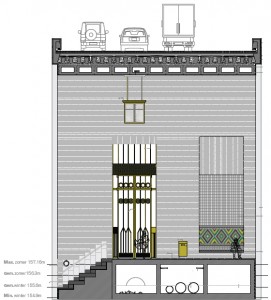 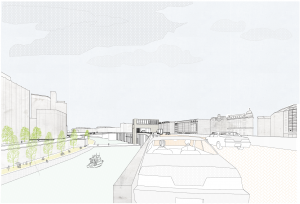 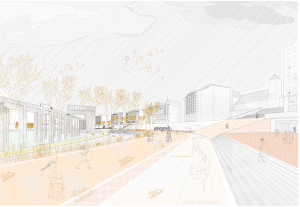 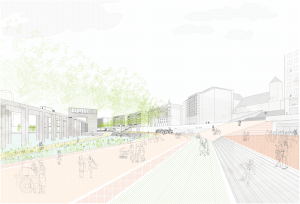 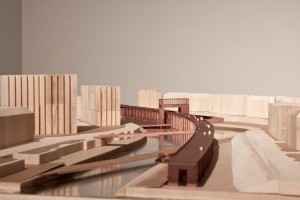 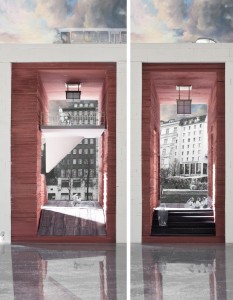 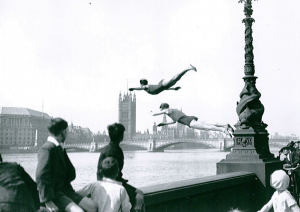 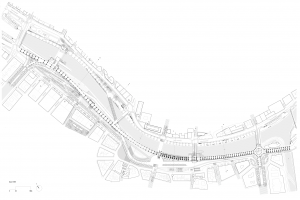 The river as a network of interconnected areas

The vision demands for a new intervention scope. By not only focusing on the direct adjacent riverfront, but search for potential areas deeper in the city to connect to, the river has the potential to become a network of interconnected areas. It can become a restructuring element in the scale of the entire city. By not denying nature, but instead fundamentally work together, a resilient river and adjacent riverfront can be created that allows for the (re-)connection of the city and its river.

Vienna is chosen as a test location for the new vision and thereby offers a valuable first case study. Vienna is inextricably linked to its river; the uncontrollable power of the Danube defined the city’s appearance for many years. Today, the river is regulated and Vienna has become one of the leading river cities in the world due to its innovative water management. Surprisingly however, even though the river is flowing through the heart of the city, Vienna turned its back to the river and there is no mutual relationship.
The implementation of the new vision has resulted in a ‘re-weaving’ of the urban fabric of Vienna. Re-weaving of Urbanism, Mobility, Architecture and Landscape. The result is a rearrangement in the structuring elements of the city with an important new position for the river. Instead of denying its presence, the proposal assures a tightly interwoven river by creating mutual relationships with the existing city. The masterplan intends to create a valuable relationship between the ‘Ringstraße’ and the Frans Josef Kai, specifically at the place where the historical city and river meet. The Ringstraße is a circular boulevard that was created in the short period of neo-absolutism in Austria in 1848. By taking down the medieval city walls its goal was to unite the inner and outer city by providing new public facilities. However, the weakest part in the boulevard remains the Frans Josef Kai; a riverfront that due to dominating infrastructure offers no quality as a public space. By studying the core principles of the Ringstraße as defined by the architect J. Stübben in ‘Handbuch des Städtebaue’, a successive experience is created by exploiting Stübben’s idea of the dynamic fruition of spaces in motion according to the different velocities of mobility. Instead of a compact bundling of infrastructure Stübben proposed for the Ringstraße, the design exploits the dynamic fruition of space in motion by extracting infrastructure according to their velocity and by using the specific characteristics of the riverfront. The result is a two kilometre public ‘building’ along the Frans Josef Kai that operates as a mediator between the city and the river. By a series of thematic interventions on the precious quality of the existing urban fabric and the new river environment a responsive, contemplative relationship with its occupants and the city is facilitated. By combining grand gestures and moments of intimacy the building creates ‘two worlds’. One is a faster, abstract world formed by a rigid monumental structure that not only provides primary connections with the surrounding city, but also frames the river landscape. A second more detailed, internal world is designed in the scale of the individual occupant and allows for intimate connections along the river. By providing a format in which the building and user can manifest themself this structure is not a single answer designed and materialized for one purpose, but allows for multiple future developments.

A contemporary answer to a classic typology

With this intervention large-scale infrastructure is created in such a way that the local situation leaves the function of the infrastructure itself intact and, at the same time, lends added value to the im­mediate urban context. It creates a situation of reciprocity. Usually, urban planners, landscape architects and civil engineers are working separately with individual interests in riverfront redevelopment. This thesis strives for an integral solution with the result a contemporary answer to a classic typology; the viaduct. Once a place exclusively for industry, today the riverfront has the potential to become a public space that allows for mutual relationships between the city and its inhabitants. It can contribute to a higher quality of life and the results of this thesis can therefore be beneficial for both the city and its individual user.